We’re thrilled that Dai Due is collecting a steady stream of rave reviews since opening its restaurant on Manor Road in August. The DBA crew thoroughly enjoyed its in-depth collaboration with owner Jesse Griffiths on the design and fabrication of the restaurant’s custom grills, knife-handle bar taps and a Caja China (picture a steel box on wheels — a fire on top, a whole animal inside).

Lead designer and fabricator Philip Burkhardt says the main benefit of this collaboration is that Jesse now has customized grills that fit his needs in a way that an out-of-the-box product simply couldn’t.

“Jesse can hang tools or meat from the crossbars, they’re easy to clean, and all the parts work on the Caja China as well,” Philip says. “These are specifically Dai Due’s grills, not just grills Dai Due bought.”

Midway through the project, Jesse brought pork, corn and basil sausages to the DBA studio so a prototype could be tested.

“The sausages were amazing, and the grill worked like a charm,” Philip recalls. “We ate the sausages while we fine-tuned our ideas. Definitely not a mail-order experience.”

Last year, Real Ale Brewing Company of Blanco, Texas, proved a standout at the Great American Beer Festival — first and foremost, for its silver-medal German-style Altbier, but also for its one-of-a-kind kiosk bar created by Design Build Adventure. The custom bar, housed within a geo-desic frame made from reclaimed whiskey barrels that Real Ale uses to make its craft beer, was a whimsical departure from the sea of 700-plus exhibitor tents.

This October, Real Ale stepped up its game at the 2014 festival, touting a fine-tuned version of the whiskey barrel bar and claiming gold for one of its Belgian-style brews.

“Like a good beer, good design is a process,” says Jack Sanders. “You’re not going to get it perfect on the first try. We wanted to make the kiosk bar even better for Real Ale this year.”

Working directly with the Real Ale team, DBA decided to replace the kiosk’s metal bar with one made of wood and reconfigure how the bar connects to the geo-desic frame. A custom round crate also was built to reduce the overall shipping weight and dimensions. Collectively, these design decisions improved the processes for setting up and tearing down at the festival, which meant the Real Ale team could spend more time doing what they do best: showcasing Blanco’s finest brews.

Real Ale is a proud sponsor of Camp Heavy Metal and Women.Design.Build.Adventure. We salute the Blanco brewery for bringing home gold at the granddaddy festival of beers!

A special shout-out goes to DBA’s Spence Kellum for being able to cut curves in plywood with a circular saw and to Jack for learning how to operate heavy equipment so the custom crate could be loaded onto the truck.

The DBA crew continues to work on Phase 2 of the Morris Camp project in Amalia, N.M.

This past summer, the DBA crew headed west (and 8,000 feet above sea level) for the Phase 1 build at Morris Camp. For two weeks, the crew camped on site as they worked. The client — who owns a spectacular piece of riverfront property surrounded by thousands of acres of protected land — hired DBA to design and build site amenities so the family can visit and camp there comfortably.

Phase 1 of the project involved designing and building a pavilion that boasts an amazing view, a large deck for a tent, an 18-foot floating concrete table, bear-proof lockers and a sink. The crew was careful to source only local materials. Stones for the pavilion were found on site, and the wood was cut and milled down the road.

Says Jack: “The Morris Camp design build adventure has been amazing. In addition to meeting and working with some wonderful people in Amalia, our team really enjoyed living and working outside. We made eggs and camp coffee every day, slow-cooked briskets for dinner and bathed in the freezing cold river — always at the hottest part of day, if we could help it.”

Phase 2 design began in August and will continue into the fall. Phase 2 build will start in early 2015. The DBA team will add decks for safari tents and a bathroom with outdoor showers. 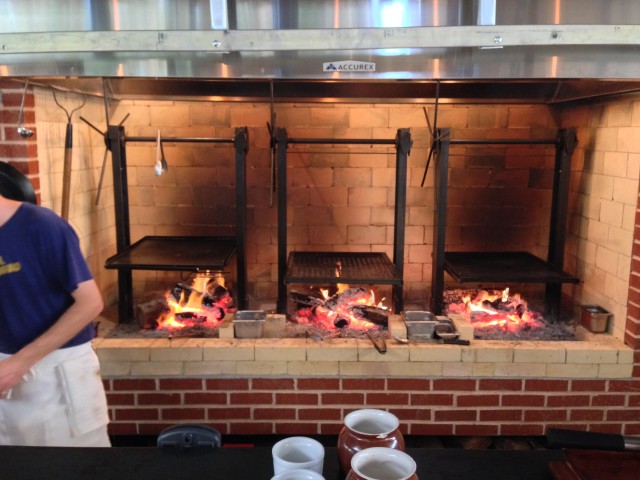 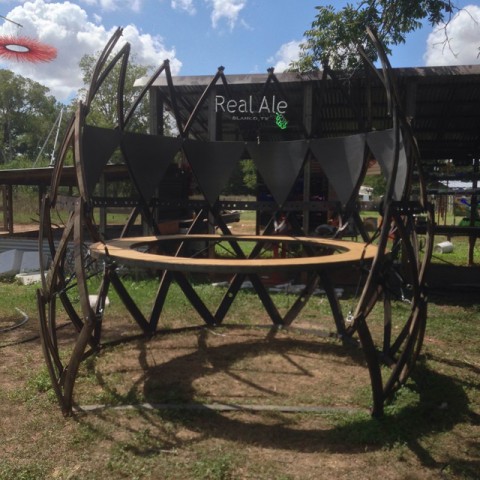 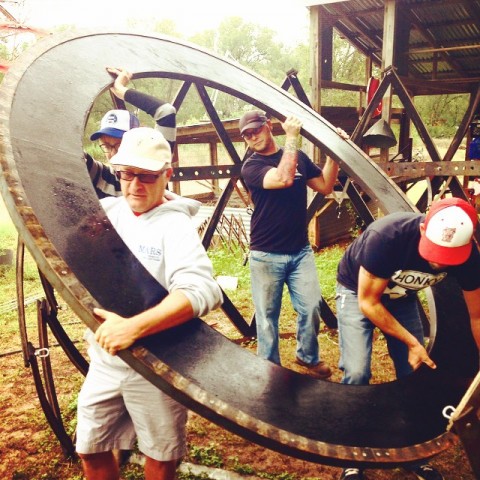 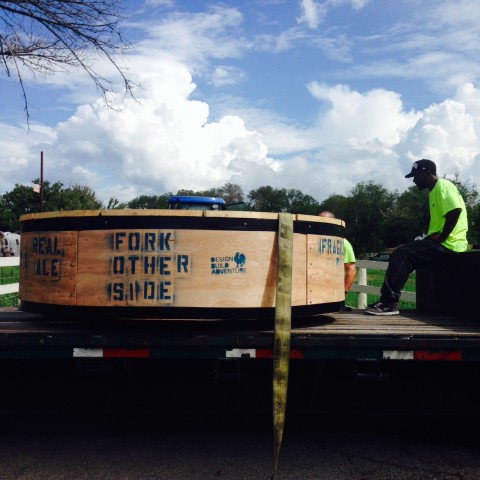 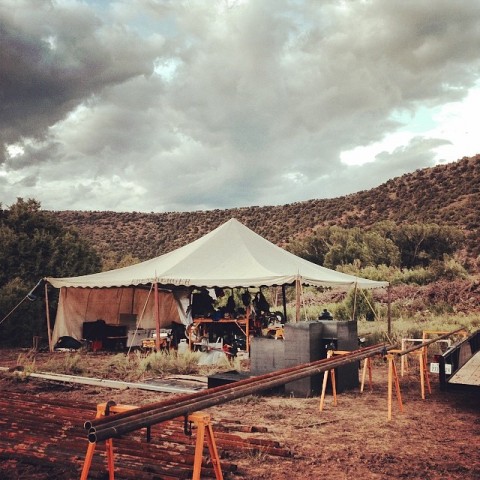 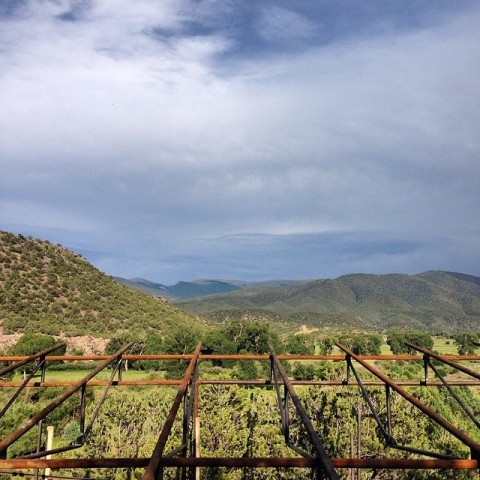 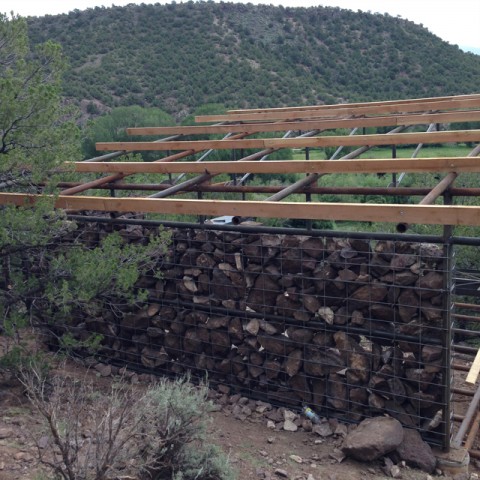 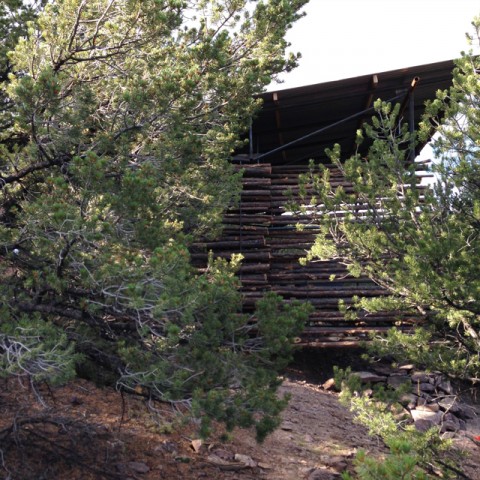 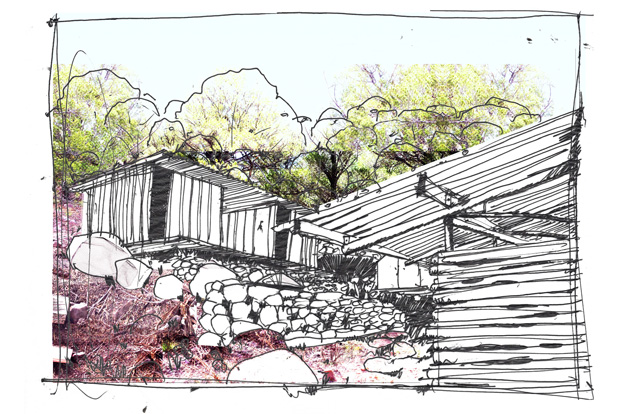